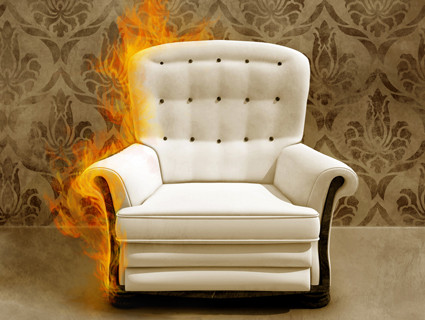 Boston, MA – Women with higher urinary concentrations of a common type of flame retardant had reduced likelihood of clinical pregnancy and live birth than those with lower concentrations, according to researchers at Harvard T.H. Chan School of Public Health. The study, conducted in the Fertility Clinic at Massachusetts General Hospital, is the first to examine associations between organophosphate flame retardants (PFRs)—which are used in polyurethane foam in many products, including upholstered furniture, baby products, and gym mats—and reproductive outcomes in women. [[Note on September 8, 2017: The researchers note that to their knowledge flame retardants are not in yoga mats.]]

“These findings suggest that exposure to PFRs may be one of many risk factors for lower reproductive success,” said first author Courtney Carignan, who conducted the work while a research fellow in the Department of Environmental Health at Harvard Chan School and now is an assistant professor at Michigan State University. “They also add to the body of evidence indicating a need to reduce the use of these flame retardants and identify safer alternatives.”

The study was published online August 25, 2017 in Environmental Health Perspectives.

One in six couples struggles with infertility—a proportion likely to rise as increasing numbers of people in developed countries delay childbearing. Previous studies have linked exposure to products containing hormone-disrupting chemicals, such as pesticides and phthalates, to infertility and poorer reproductive success.

The flame retardant PentaBDE, used in polyurethane foam, was phased out more than a decade ago after it was linked with negative health effects in animal and epidemiologic studies. PFRs were introduced as a safer alternative, but they have been found in animal studies to cause hormone disruption. Studies have also shown that PFRs can migrate out of furniture and other products into the air and dust of indoor environments.

For this study, the researchers analyzed urine samples from 211 women undergoing in vitro fertilization (IVF) at the Massachusetts General Hospital Fertility Center between 2005 and 2015. The women were enrolled in the Environment and Reproductive Health (EARTH) study, which looks at how environmental chemicals and lifestyle choices affect reproductive health. The statistical analysis took into consideration factors including maternal age and race, smoking history, and body mass index (BMI).

The researchers found that the urinary metabolites (products of a chemical that has been metabolized) of three PFRs— TDCIPP, TPHP, and mono-ITP—were detected in more than 80% of participants. On average, compared to women with lower concentrations of these metabolites, women with higher concentrations had a 10% reduced probability of successful fertilization, 31% reduced probability of implantation of the embryo, and a 41% and 38% decrease in clinical pregnancy (fetal heartbeat confirmed by ultrasound) and live birth.

“Couples undergoing IVF and trying to improve their chances of success by reducing their exposure to environmental chemicals may want to opt for products that are flame-retardant free,” said senior author Russ Hauser, Frederick Lee Hisaw professor of reproductive physiology and acting chair, Department of Environmental Health.

Further research is needed on the potential impact of male partners’ exposure to flame retardant chemicals and on the joint effects on both men and women of exposure to different types of environmental chemicals, the researchers said.