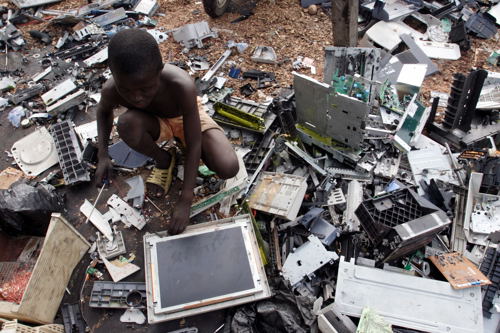 Nigerian men who work with electronic waste have much lower levels of crucial fertility hormones than men unexposed to the waste, according to a new study.

The research, conducted in Benin City in southern Nigeria, suggests toxic metals and other contaminants in e-waste are reducing levels of key hormones in men in developing countries and could contribute to reduced sperm levels, and cause damage to the sperm’s DNA, stability and ability to fertilize eggs.

“Three key hormones controlling [production of mature sperm] were significantly lowered in the exposed studied group, the decrease in the hormones … may result in low sperm count and infertility,” the authors wrote in the study published this month in the peer-reviewed journal Universa Medicina.

The researchers tested 63 e-waste workers and 41 men who did not work with e-waste. The e-waste workers had high levels of multiple toxic heavy metals, including arsenic, mercury, lead and cadmium. These metals are all endocrine disruptors—meaning they interfere with the proper functioning of hormones.

E-waste—which covers a wide variety of products including medical devices, refrigerators, cell phones, computers, batteries—is a growing problem. Last year the United Nations reported there was about 49 million tons of e-waste generated, which was an 8 percent increase from 2014. The same report estimated e-waste would increase another 17 percent by 2021.

Only 20 percent of annual e-waste is safely recycled—and most are sent to developing countries, like Nigeria, which is starving for economic activity.

A report this month from United Nations University and the Basel Convention Coordinating Centre for Africa found more than 66,000 tons of used electronics were sent to Nigeria in 2015 and 2016; about a quarter was illegal e-waste.

These discarded, often broken-down, products are full of contaminants. Approximately 1,000 different chemicals have been reported in e-waste.

The e-waste workers in the new study either purchased, dismantled, repaired or resold e-waste.

The study was limited in that it was small sample size. However, the authors said the association between the waste and decreased hormones was “remarkable” and said these findings underscored the need for “extensive studies on the toxicology of e-waste in the growing exposed human population in Nigeria.”